Who will foot the bill for green development in poor countries?

"Amid the wreckage of the 2009 Copenhagen climate summit, an agreement that rich countries would, by 2020, furnish developing ones with $100 billion a year to help them mitigate and adapt to global warming looked like a rare achievement. This commitment will also be a big talking point at the next annual UN summit, due to start in Durban on November 28th. With almost no hope of a big new pact, many expect progress on the formation of a global Green Climate Fund to be one of its few successes. Yet there is huge uncertainty about how developed countries will deliver on their promise, including what role the fund will play."

This is a real and topical issue. The Ecuadorian Government is prepared not to extract oil from the rain forest if developed countries compensate it for a part of the losses. Some countries have pledged funds and others see it as blackmail. I think that it the rainforest is a global good - the positive externalities are felt by the whole world. It is only therefore right and proper that everyone should contribute towards it.

Even more importantly, it is good economics to do so. The country would benefit greatly from exploiting the oil - significantly more than the USD 3.6bn they are asking for, in fact. Whereas it would lose little from destroying the rainforest. After all, there is plenty more of it in the world - they would still have plenty of oxygen from rainforest in other countries. Not only this, but with a purchasing power GDP of around USD 7,000 per capita, that money can go a long way. The opportunity cost of not exploiting the oil is high.

The rest of the combined world though has something to lose and some countries can afford to pay for it. There is again a problem of collective action - individually, each country gains only a little from the Ecuadorian rainforest. Setting up of a fund to pay for green development can help to mitigate this.

You can also make your own individual contribution. How much is the oxygen that you breath from the Ecuadorian rainforest worth to you?


Watch a video about the area too:

Posted by Unknown at 4:51 PM No comments:

Email ThisBlogThis!Share to TwitterShare to FacebookShare to Pinterest
Labels: climate change, economic development, energy
Here is a view from The High Line: 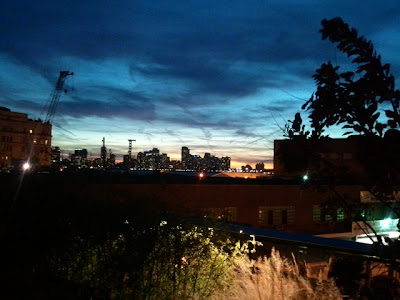 And the end of it: 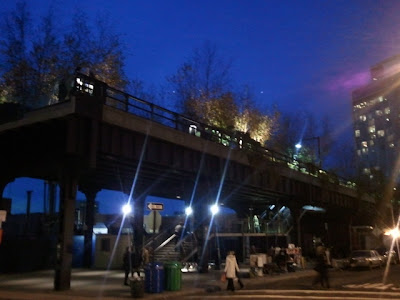 Urbanisation is good for the environment. If you like nature, keep away from it. In Africa it would allow for larger, more efficient farming to replace smallholders. People are increasingly choosing even difficult city life over rural life because it provides far greater opportunity. Some development workers find this difficult to accept, believing, I think, incorrectly, in some idealistic rural life. The fact is that we don't see the difficult part of rural life but we see very easily urban squalor. More efforts have to be made to make cities better places though. One's surroundings impact heavily on mental health, learning, behaviour, and more. Creating nice spaces in cities is important for mental health and therefore productivity. People need green spaces. Developing countries could probably not justify the resources used for The High Line but more effort to create green, clean spaces in urban Africa and elsewhere could prove beneficial for development and health. An article today reports that poor sanitation has negative effects on economic growth.

Adaptation to consequences of climate change in Kenya

The BBC has a short article on use of greenhouses in agriculture to help counteract the heavy drought in Kenya. Below is a short video, also in Kenya, on the impact of drought and climate change.

I find the below interview somewhat leading but it is still interesting.

I spotted this mini-multistorey parking in NYC. What a great little compact way to save some space on the street. More space can be made for people, bikes, and other things. 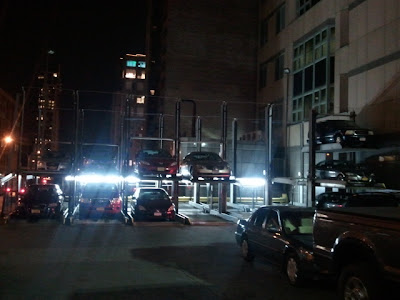 It is a good thing to reduce the amount of space cars take up in urban areas. 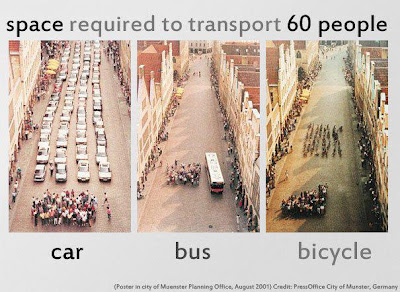 A complete waste of resources

Here is a photo of my lunch yesterday. Don't get me wrong; the burger was delicious. But did I really need a whole cardboard dish with a smiley face in ketchup? I don't even like ketchup. 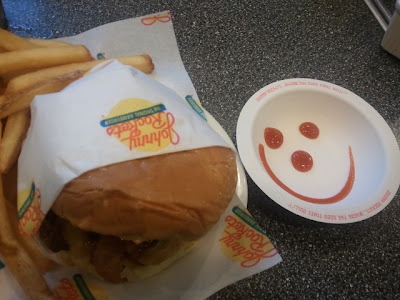 Why petrol needs taxing more despite a lack of alternative transport

I had an interesting conversation last night about the necessity to tax petrol more. At least, partly conversation, partly me ranting, but that still counts.

In the past, I have had conversations with a number of people who have expressed the opinion that petrol can only be taxed more when there are viable alternatives. American cities especially have been built based on petrol prices which do not represent its full marginal social cost. Therefore, there are sprawling suburbs and under-resourced and under-utilised public transport networks, which can be difficult to develop anyway in sprawling cities. People have to drive to get to work and to get to the shops because they live so far away and because they have few public transport options. You can't change this situation without a large change in the urban environment and in public transport alternatives. A sudden increase in petrol taxes would hurt dearly and hit productivity as it may prevent some people from being able to work in a place where they are most productive.

This is all true. Or mostly true. Here are a few counters:
1. A lot of journeys currently made by car can actually be made by other means and an increase in petrol prices should make people think twice about which journeys are most important to make and which to make in the car.
2. I also wouldn't advocate a sudden sharp rise in petrol taxes but even a slower increase would have negative impacts allowing for behavioural and financial adjustments as well as giving time to develop useful public transport.
3. I also think that increasing petrol prices would create demand for transport alternatives (including electric cars). It is far from obvious to me that creating transport systems first would work because it is not necessarily easy to predict how people or firms might relocate following a petrol price rise or, given this, what transport types would be most useful. Nor, is it obvious to me that we would ever reach this point of 'sufficient public transport infrastructure' to increase petrol taxes. It is a constantly moving target. Therefore, better to increase taxes and let a mixture of the public and private sector respond to the changes more organically.

The private cost of petrol does not equal the full cost to society; somebody, somewhere in the world is already paying. The suburban commuter might have to pay more for petrol but it is not enough to say that he has to have a good alternative right now because at the moment another person is subsidising his lifestyle. The farmer in Africa who loses his crop to flooding due to climate change really had no alternative. The small businesses that can't survive due to flooding or the child who drops out of school or the American state who has to issue debt to pay for water management to ensure people have enough to drink and water crops are already paying for the difference between the private and the public cost of petrol. These people are making a transfer to the suburban commuter now.

In most of these cases, these are transfers from the poor to the rich. The poor are hit hardest by climate change and the effects of pollution. They have no choice about these transfers. In this respect, the current situation is comparable to plunder at the very least and potentially an act of war. It is a little as if the suburban American commuter is plundering a defenceless farmer's field and then complaining that his life would be difficult if he didn't do this and he cannot afford to do otherwise. And when we say that we need to provide him with better public transport (which might be true), we are validating his continued plunder. This is unacceptable and cowardly.

Obviously, not all pollution should be banned and humans cannot exist without polluting but there needs to be a compensating mechanism. More money needs to flow from wealthy countries which do most polluting to poorer ones that suffer most. And individual people, including our suburban commuter, must think twice before infringing on others' rights. The best way to make sure that it is really worth it is to pay the full social cost. Taxes on petrol need to begin rising slowly starting now.

Posted by Unknown at 4:03 PM No comments:

How biking can save cities billions of dollars in health expenses

Nearly 70 percent of Americans' car trips are less than two miles long. It's a no-brainer that biking instead of driving to take care of these trips is a great way to get exercise while cutting air pollution. While we've always assumed that the cumulative effect of many individuals making that choice would be longer, healthier lives and cleaner air in our cities, a recent scientific study put some rigor to our hypotheses and proved us right.

Climate change is causing weather patterns to become more and more extreme and unpredictable. Rising sea levels and heavy rainfall will cause large-scale city flooding. Some countries - like Mauritius might disappear altogether. The economic costs are huge.

The Central Bank of Thailand has revised down it its growth rate from 4.1 to 2.6% because of the flooding in Bangkok which has destroyed businesses, homes and livelihoods. In Europe, heavy rainfall is blamed for car pile-ups in Genoa (photo below) and Britain's worst road accident in years. 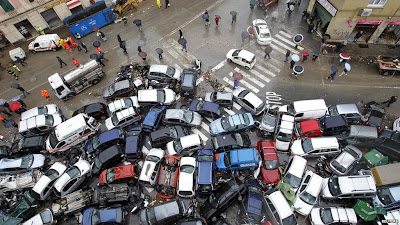 Posted by Unknown at 4:00 AM No comments:

The economic and human costs of high urban pollution

"For the past few days, Beijing has been covered by a thick blanket of smog, forcing the closure of several highways and the cancellation of hundreds of flights. The US embassy in the Chinese capital has warned that air quality has reached hazardous levels and, according to media reports, hospital admissions have risen by almost a third."

THIS short BBC report shows a scientist taking his child out of school because he judges pollution levels too dangerous for the child to be outside. There are increases in hospital admissions as a result of the smog and presumably many work and education days lost to illness. The lost human capital and work effort will directly contribute to lower economic growth this year and for many years to come. A nice illustration of the economic of high pollution.
Posted by Unknown at 2:19 AM No comments: