Bike transport in the developed and developing world

Bike sharing around the world

Rent an electronic bike in London

Bikes made from bamboo in Zambia (HT: MM)


Speaking of Zambia - a free and fair election in which the incumbent loses and goes peacefully. Could Banda be a candidate for the Mo Ibrahim Prize?

Extreme weather patterns are likely to become the norm. They wreck havoc in the developed work causing floods, droughts and fires. Here is a beautiful slide show of the 2011 Texas drought. Unpredictable weather patterns can be deadly in developing countries though. The desertification of Mali has deprived villages of their food sources and livelihoods. Food security is threatened and makes it difficult for subsistence farmers to plan ahead. New forms of crop can help and weather insurance is slowly becoming more widespread. The developing world, ultimately, will be hardest hit by climate change.

Posted by Unknown at 6:22 PM No comments:

What do hot summer days in Beijing and heavy rains in rural Colombia have in common?

"Both are climate events that can trigger a host of public health calamities. The climate and public health fields would seem to be a match made in heaven. However, practitioners in those fields often have a hard time connecting." Read the full article HERE.
Posted by Unknown at 2:51 PM No comments:

Watch on youtube HERE.
Posted by Unknown at 8:39 AM No comments:

"For the first time in its ten year history, the Carbon Disclosure Project (CDP) Global 500 survey report reveals the majority of the world's largest public corporations have climate change actions embedded as part of their business strategies. The survey also finds that companies with a strategic focus on climate change provided investors with approximately double the average total return on their investments."

This is what you would expect if the majority of consumers favour companies which care about the environment. Or caring about climate change could be a luxury good for firms - only the more profitable ones can afford to care.

Green opportunities for profit exist in developing markets too.

Tehran is sometimes effectively shut down due to the pollution levels and some estimates put the number of deaths caused by pollution there at 3,600 per month.

Iran is heavily energy intensive but with fuel subsidies amounting to a staggering 20% of GDP, it is no surprise that Iranians over-consume it. Unsurprisingly, analyses show that fuel subsidies are bad for the environment and are unsustainable from a development perspective. Thankfully, there have been large recent reductions in Iran.

Nonetheless, Abbas Milani thinks that one of the toughest questions journalists could as President Ahmadinejad is on his government's neglect of some environmental issues:
"Your government has been oblivious to the grave ecological dangers faced by your country. The Zayandeh Rude River in Isfahan has dried up; the drying up of Lake Orumiye will affect the lives of hundreds of thousands of Iranians living in the area. Why have you, in spite of your much-touted trips around every province, ignored these grave problems?" 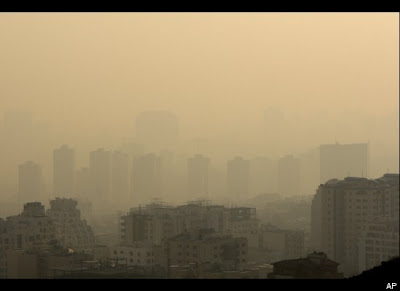 Taken from the Wikipedia article on Lake Orumiye, here are satellite images of the rapid shrinking of the lake between 2003 and 2010: 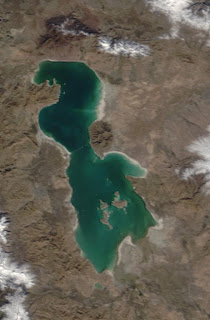 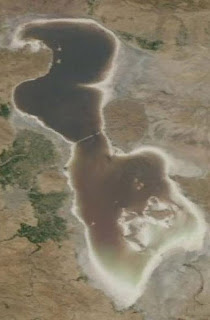 Posted by Unknown at 1:47 PM No comments:

"A new study by the World Economic Forum (WEF) and the Boston Consulting Group (BCG) identifies 16 emerging-market firms that they say are turning eco-consciousness into a source of competitive advantage. These highly profitable companies (which the study dubs “the new sustainability champions”) are using greenery to reduce costs, motivate workers and forge relationships. Their home-grown ideas will probably be easier for their peers to copy than anything cooked up in the West.

The most salient quality of these companies is that they turn limitations (of resources, labour and infrastructure) into opportunities.

The central message of the WEF-BCG study—that some of the best emerging-world companies are combining profits with greenery—is thought-provoking. Many critics of environmentalism argue that it is a rich-world luxury: that the poor need adequate food before they need super-clean air. Some even see greenery as a rich-world conspiracy: the West grew rich by industrialising (and polluting), but now wants to stop the rest of the world from following suit. The WEF-BCG report demonstrates that such fears are overblown. Emerging-world companies can be just as green as their Western rivals. Many have found that, when natural resources are scarce and consumers are cash-strapped, greenery can be a lucrative business strategy."

Read the whole article HERE.
Posted by Unknown at 10:02 AM No comments:

Posted by Unknown at 2:47 PM No comments: